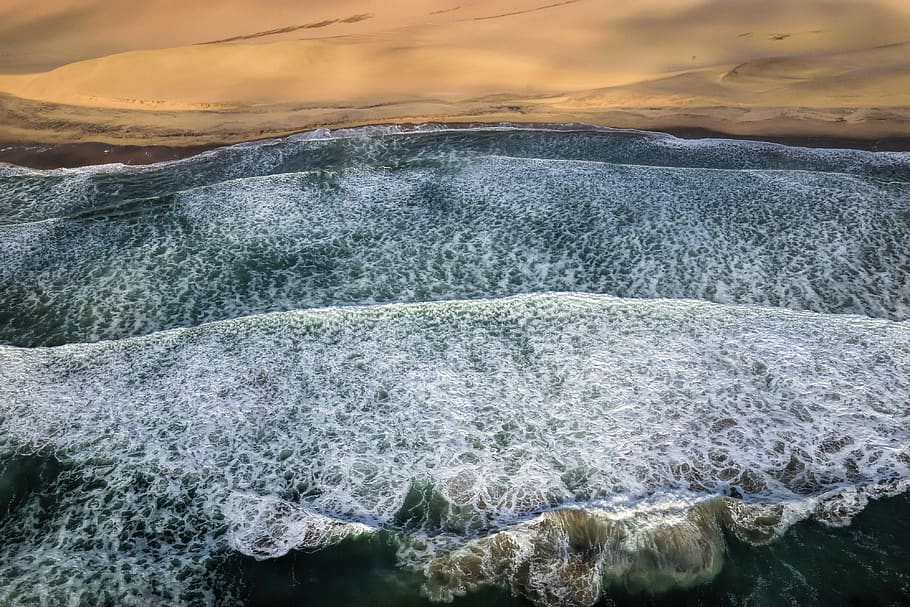 Namibia’s coastline stretches 1572 km, from the southern border with South Africa, until the northern border with Angola. The coastline is rich in geographic diversity, as well as in natural beauty, sights and activities. The Namibian coastal towns include Swakopmund, Walvis Bay, Henties Bay, and Luderitz, and smaller spots to camp and visit such as Mowe Bay, Torra Bay, and Elizabeth Bay.

Swakopmund, or simply Swakop for short, is one of the most popular holiday destinations in Namibia. This quaint town is a well-known holiday town, where many Namibians and foreigners alike spend weekends away, and much of the festive season. Swakop is characterised by its colonial-era German architecture, as well as the big sand dunes that tower directly to the south of the town. It is no wonder why Swakop is one of Namibia’s top holiday destinations, as there are loads of things to do in this small but exciting town. Cultural activities include visiting the aquarium, the museum, the Kristal Galerie (‘Crystal Gallery’ – a museum dedicated to precious gems and minerals of Namibia), and more. The town centre is an exciting bustle of small shops and cafés, and you can easily walk from town to the beach, to the Jetty or to the Mole (ideally with an ice-cream in hand).

Moreover, there are numerous outdoor activities such as electric motorcycle or bicycle tours of the town, fat bike (special bicycles with large tyres to drive over the sand)  and quad bike tours in the dunes, dune-boarding, dune-climbing, and so on. The desert is both beautiful and has many exciting activities in store! One can also take walking tours into the desert to witness the incredible fauna and flora, as well as tours to the landscape surrounding Swakop, such as the Moon landscape. For the extreme thrill-seeker, you can even go skydiving over the desert!

For a more relaxed, yet still lively experience, you can drive about 22 kilometers north of Swakopmund towards Henties Bay, where you will find the locally beloved Windpomp14, a restaurant with delectable fresh seafood dishes and warm, upbeat atmosphere. It is also a popular spot for camping on the beach, with spacious camp spots with individual bathroom and kitchenette facilities.

Walvis Bay, which is 30 kilometres to the south of Swakop, is more of an industrial town, but also has its own unique charm. The Walvis Bay lagoon is an ideal spot for a sunset stroll, where you can see flamingos and pelicans, and there are restaurants and cafés on the water with wonderful seafood specialties. From the Walvis Bay waterfront, you can go on a catamaran tour of the harbour and lagoon area, with a chance of seeing seals, dolphins, and even whales! One can also do kayak tours from Pelican Point, which is a scenic drive out of Walvis Bay. From a kayak, you will be right amongst the playful seals, and if you are lucky, you can be visited by the dolphins! Dune 7, the tallest dune in Namibia, is another short drive out of Walvis Bay, and is a tough but exhilarating climb. For a longer tour out of the town, you can travel south of Walvis Bay to see the magnificent Sandwich Harbour – the ultimate desert-meets-ocean scenic experience!

There are several ghost towns along Namibia’s coastline. The most famous of the ghost towns is Kolmanskop. It is situated about 10 kilometers inland from Luderitz, and it is an abandoned mining town. Kolmanskop is a photographer’s dream – the old wooden houses have slowly been permeated by sand dunes over the years, making for a fascinating sight as the desert has overtaken the town. Elizabeth Bay is a small mining town, situated about 25km south of Luderitz, and it used to be known as a ghost town. However, the mine was reopened, and the town has once again become occupied. Lastly, 15 km south of Elizabeth Bay, is Pomona, the smallest and least known of the three ghost towns. All three of the ghost towns are located in an area called the Sperrgebiet (‘prohibited area’), which, even though it is a national park, is mostly closed off to public access because of diamond mining.

Namibia’s Skeleton Coast makes up most of the northern half of Namibia’s coastline. The name comes from whale and seal bones that have always been found along the sea, as well as over 1000 shipwrecks that are scattered across along the coastline. The Skeleton Coast is known for its desert wildlife, such as desert lions, desert elephants, hyenas, black rhinos, and more. There is also a world-famous surf spot called Skeleton Bay, where surfers from all over the world come to experience the legendary barrels! The southern part of the Skeleton Coast, from the Ugab River until Torra Bay, is open to all travellers, however the northern part (up until the Angolan border) is restricted and one requires a permit to enter this area, which can be acquired from Windhoek or Swakopmund.

Whether you want to have an outdoorsy, camping adventure, or whether you want to visit small coastal towns with a variety of sights and activities, the Namibian coast has a lot to offer! You will also be able to experience the most unique of natural phenomena, the desert meeting the ocean.